Pakistanis are known to be a nation that lives to eat and not the other way around. With all the diverse tastes and cuisines this country has to offer, who could blame us?

We heavily recommend you to try these awesome Pakistani foods, if you already haven’t, before you turn 50 and start feeling guilty about your weight. Reader discretion is strongly advised if you’re reading this on an empty tummy.

Arguably Pakistan’s favorite breakfast item, the combination of Sooji ka Halwa, Aaloo ki Tarkari, Chanay, and soft pieces of hot fried Puris has, it seems, come straight from the valleys of Heaven itself. Top it all off with a giant glass of Lassi, Pakistan’s favorite yogurt drink, and add in a mix of onion and tomato achaar, and you’re good to go for the entire day. Maybe even the entire week.

Since we’re talking about breakfasts, the list would be tasteless without the addition of the special Chai Paratha available only at the local dhabay. The Parathay are eaten by first rolling them into eatable proportions, and then dipping them in steaming hot doodhpatti chai.

Nihari is one of Pakistan’s most popular dishes, mostly savored in Punjab and in the urban areas of Sindh, and is consumed with naan or sheermal. Complete with the slow-cooked beef and tender goodness of naan, the creamy goodness of little pieces of nalli, topped off with a trickle of lemon, coriander leaves, ginger, and green chillies – an experience that is an absolute joy to savor.

This delicacy is straight out of the food diaries of Satan himself. However, it is purely Halal, and utterly delicious! This is one of the most delicious and calorie-filled items available to us Pakistanis. According to some desi legend, if you consume maghaz (or brain) once in your life, the calories/cholesterol remain in your system forever!

Paye is a slow-cooked dish made from the bones and adjoining flesh of the legs and feet of mainly goat or sheep. Baray ke Paye, however, is made from the bones of cows and buffalos. This piece of brilliance was discovered by the Persians and later on adopted by Indians. The tradition to eat Paye is the same as that of Nihari – often consumed during breakfast, but mainly remains to be a dinner dish for the Winters.

Sarson da Saag te Makki te roti – the very essence of the province of Punjab – the heavenly combination of Saag and Corn Bread. This, too, like the Paye, is a dish for the winters. Can be enjoyed with an extra lump of butter on top, and a glass of salty lassi to top it all off!

Probably the only ‘healthy’ dish on the list, Sajji is a popular Balochi dish where a whole marinated lamb/chicken is grilled on skewers, in its own fat. Usually charred and cooked on coal, until the flesh turns golden, the Sajji is eaten with naan or Qandhari naan (the older brother of a naan). 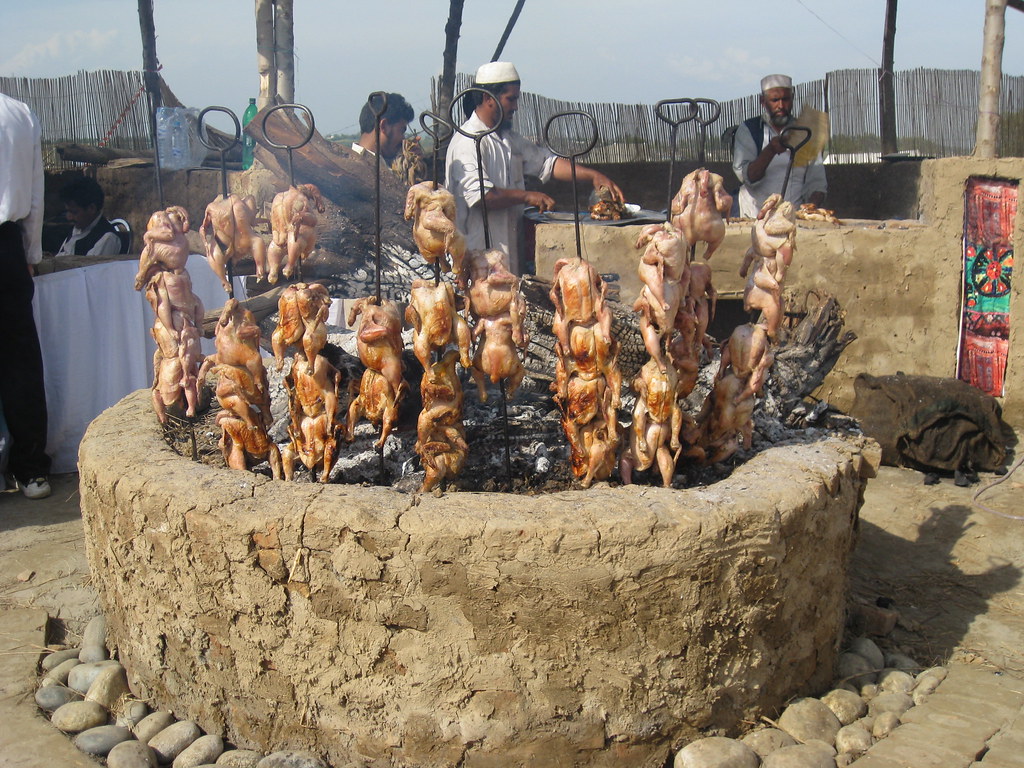 Lahori Chargha is a whole chicken is marinated in all sorts of yummy things including tamarind, spices, lemon juice, and whatnot, before steaming it in a pan. This is where the healthy food is flushed down a steaming hot pan of boiling oil, where the chicken is deep fried and voila! Sprinkle some chat masala, open some fizzy drink cans, and enjoy Pakistan’s answer to KFC!

One of the lesser known dishes, but arguably one of the most scrumptious, the Painda or Sohbat is a special dish that is quite popular in Northern Pakistan. A flavorsome, watery gravy with tikka masala is served on a bed of pieces of hot chapatti. This is one of the most beautiful looking savory dishes in Pakistan, and also one of the tastiest! 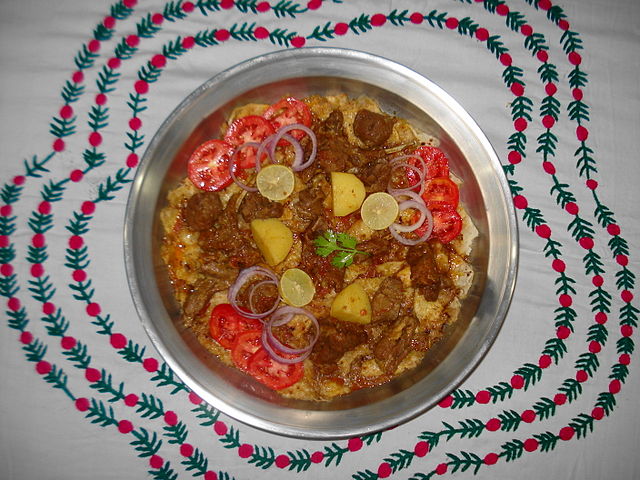 Not technically a Pakistani dish per se, but still one of the most popular rice dishes in Northern Pakistan, the Kabuli Pulao is the combination of everything that makes people love food – dry Fruits, nuts, vegetables, rice, and mutton/beef! Arguably the most delicious kababs in history and one of Peshawar’s favorite things to eat, Chapli Kababs are made with beef or mutton, and have a distinctive taste. 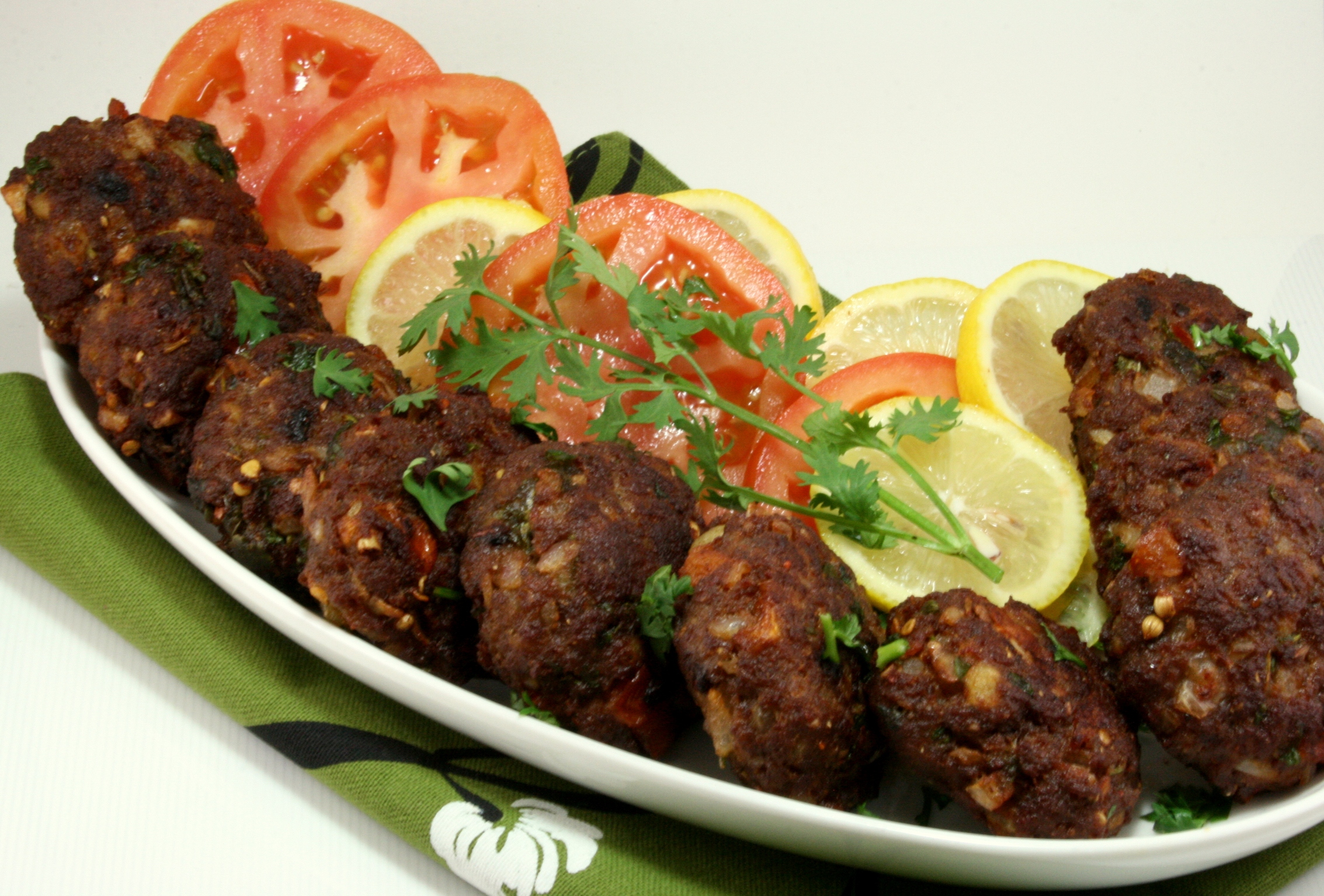 Butter and chicken combine together with loads of spices, made in a handi, to give us the sweetest smelling, fat-inducing, mouthwatering bowl of yummy goodness, the Makhni Handi. The Kata Kat gets it’s name from the sound the cook makes with the cooking utensils while making this dish. It’s a mixture of finely chopped pieces of meat, vegetables, kidneys, livers, (and errm.. some other things) and is made in blocks of butter! Yummy!! Normally eaten with naan followed by a big pack of green tea with lemon, and a week-long diet! 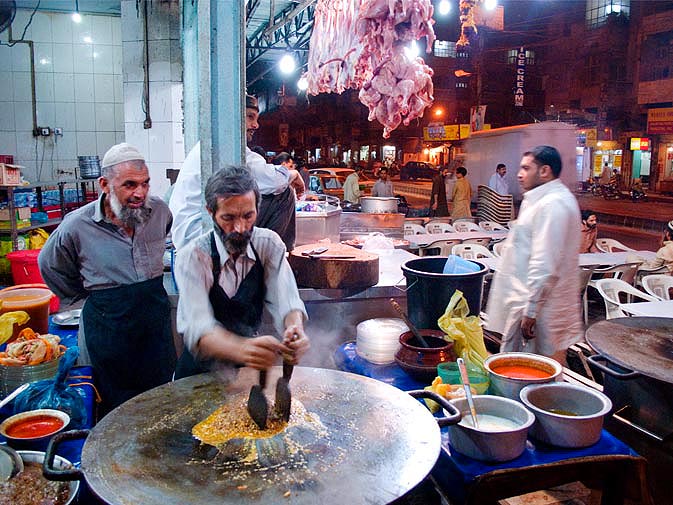 A dessert straight from the Palace of the Emperors, the Shahi Tukrray are made with milk and fried bread, and topped off with whipped cream and nuts, for extra awesomeness!

Bunyad Foundation has taken up the noble task of helping those with mental health concerns in rural areas of Pakistan, the most neglected bunch.

PIA pilot Shumaila Mazhar spoke up after photos resurfaced where people and some sections of the media wrongly labeled her as sister of pilot Maryam M...

Asim Azhar’s Song, With TikTok Star Areeka Haq, Is Visually Stunning But Terrible With Its Portrayal Of Women

Airlift Grocer, by the mass transit startup Airlift, has launched in Pakistan with the promise to bring you whatever you need, at home.

These Techies Have Made Pakistan Proud On a Global Scale