This is How Pakistani Fashion has Influenced the World

Many in Pakistan like to emulate the western culture, particularly by dressing up in western attire but there is a peculiar thing happening, of late. Western community seems to be adopting the Pakistani dressing sense, from Versace to Paul Smith, a number of designers have displayed their Pakistan influenced collections at at high profile fashion weeks, recently. There were some designers who acknowledged the fact that their collections were inspired by a country with rich culture (Pakistan, of course) but some designers took the whole credit of their ‘unique’ collection just for themselves.

MangoBaaz presents to you a collection of all the western fashion that they have taken as inspiration from Pakistan:

The acclaimed designer Donatella Versace’s recent men’s collection in Milan was inspired by the Shalwar Kameez that we see every other Pakistani man dressed in.

The famous Zara also copied the style of long kameez for women.

Interesting how the goras are wearing our national dress with interesting combinations. I mean tie with a kurta? Wow!

Also called the Peshawari chappal, a kheri is a traditional shoe that men pair up with shalwar kameez. When Mr. Paul Smith did a copycat version, that caused a national outrage here in Pakistan. 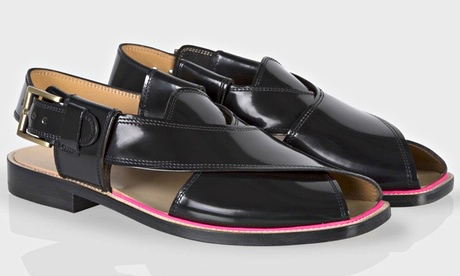 What hurt Pakistanis was that he stole the whole concept of a ‘kheri’, slapped a $600 price on it and called it his own innovative creation, the ‘Robert Sandal’. Pfft. Maybe he needs to visit Peshawar to learn how to make an asli kheri.

In Pakistan, it is not uncommon for women to veil themselves by wearing this big black cloth stitched in various cuts and made fancy with all those sequins and lace on the borders. The thought of a man wearing a ‘burqa’ will amuse many and this is what the Hunger Games costume designer Sasa Kovacevic did at the Mercedes-Benz Fashion Week held in Berlin.

His collection was inspired by the Islamic concept of covering one’s self. But he failed to realize that it is meant to be for women and not men, historically.

Anyone who lives in Pakistan will be familiar with the growing trend of wearing teekas and matha pattis to a mehndi. Well, it seems like Chanel, the favorite of all aunties and fake bag carrying girls, fancied the idea of wearing this traditional jewelry and incorporated it in one of it’s fashion shows where the models were spotted wearing the traditional teekas with skirts and coats. Interesting.

Or harem gypsy pants as the western world prefers to call these. They are all the rage in the West these days for they are comfortable and “quirky” to them. Of course, being an ethnic piece of garment is an added attraction for the goris. 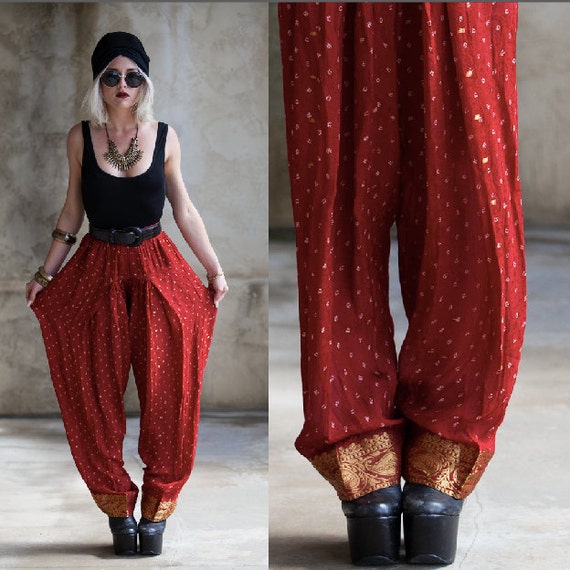 The crop tops and skirts that are trending in the West these days are, to be honest, a very close copy of our version of the skirt and top – lehnga and choli.

The Indians have even started wearing a hybrid of the two styles. Na teetar na batair.

Turbans have been a traditional everyday outfit from the times even before Pakistan was ‘Pakistan’. Now, it may be mostly limited to rural folks or events like weddings but the West has become smitten by it. Jean Paul Gaultier, in particular, brought the garment into mainstream with his fashion show in 2007.

Mostly worn by women for valimas or school and college farewells, sari is an elegant attire which looks good only when you know how to carry it properly. Hermes, the brand that makes the Birkin that Lahori aunties love to carry, did a collection that was inspired by this dress with, of course, a western touch to it.

Can you spot any other trends or fashion that the West has copied from Pakistan?