Pakistan's Report Card: This is How Minorities Fared in 2015

Contrary to the promise of freedom that lay the foundation to this country, the plight of minorities in Pakistan is not new. The Constitution that ought to be the mortar and brick dictates the rights of minorities over and over again, however, the custodians of that very Constitution have failed us. Whilst 2015 saw a marked decrease in general terrorist activities, the systematic attacks over minorities only accelerated.

While we were promised rigorous anti-terrorism activities, the bourgeoisie oft disappoints.

First they came for the Shias, and I did not speak out—

Because I was not a Shia. January 30th, 58 persons were killed and 60 injured as a Shia mosque was attacked in Shikarpur, Sindh.

A half-hearted speech endorsing minority rights and empty promises were made. No action. No concrete steps were taken to ensure that citizens like you and I, fellow Pakistanis, could practice with the freedom this country promised them. The ideals that this country chalked out spoke highly of religious minority, later colluded and polluted in Zia’s regime, out-rightly legitimizing prejudices. Have we forgotten that our very own baba-e-qaum Muhammad Ali Jinnah belonged to this very sect that we refuse to protect? Why must we be the first to urge and beseech fellow Muslims to speak up for the Palestinians, when our own borders are no less barbaric?

Why are we riled up so easily if a muslim is wronged in the western hemisphere whereas we bury innocent victims in our very own backyard?

The justice system is awfully poetic where limited steps are taken to reinforce articles of the Penal Code that state in black and white, “enmity, hatred or ill-will between different religious, racial, language or regional groups or castes or communities” will be punishable by law however, a rather quick-footed anti-terrorism court that should be passing verdicts on actual violent activities sentenced a Shia man to 13 years in jail for Facebook hate-speech.

Let that sink in.

As militant outfits with links to the Taliban continue to take responsibility for these vile attacks, the Sunni majority turns a deaf ear to the systematic ethnic cleansing of the Shia majority – let us refrain from labeling them a minority altogether because that simply isn’t the case anymore.

Then they came for the Christians, and I did not speak out—

Because I was not a Christian. March 15th, two churches in Yuhana Abad, Lahore were bombed during Sunday services, 17 people were killed initially as what later transpired into an episode of utmost horror. Angry mob retaliation took justice into their own hands and burned two suspected terrorists alive – where were the guardians of constitution and upholders of law? During the next three days, lawlessness and lack of action against those responsible raised the death toll to 21 with as many as 84 injured. These might just be numbers in a long list of statistics and figures but to some, the numbers meant their lives toppled over forever.

What was once a place of sanctity, worship and peace, were now reduced to rubble, fragments and blood. 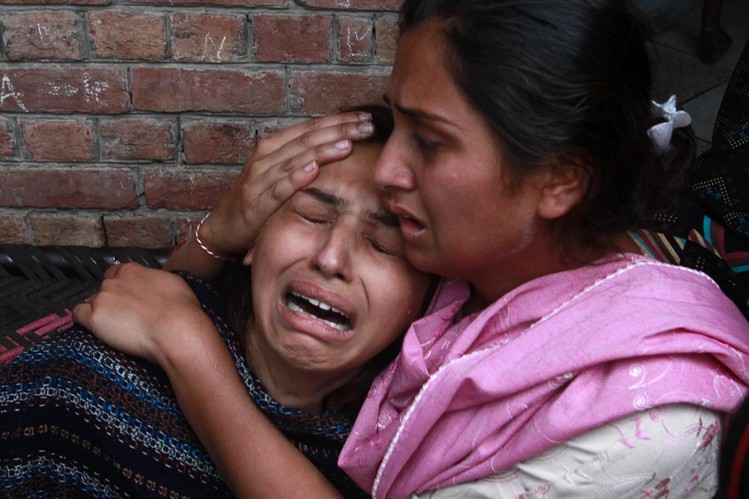 It would be a great disservice to the memory of Salman Taseer – and many other brave brethren – to brush the blasphemy narrative aside at this point. The said laws have been a misinterpretation of epic proportions, standing against the values of hope, peace and co-existence we once held most dear. Let us take the case of Shama Bibi and Shehzad Masih in point, a couple beaten and burned in a brick kiln upon allegations of desecration of the Holy Quran in 2013. Bibi, pregnant at the time, took an axe to her belly as her child watched in horror, 18 months old at the time. A crowd of 1,200 gathered.

An incident so barbaric that Asia Bibi’s husband – the one whose case Late Taseer championed – said, ‘After this dreadful incident, I consider my wife lucky’

Asia is behind bars since 2009 and facing death row.

Then they came for the Ahmadis, and I did not speak out—
Because I was not an Ahmadi. 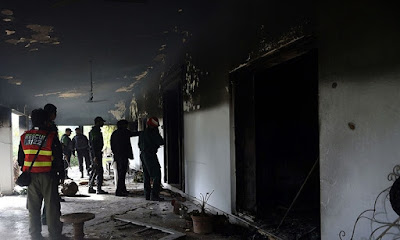 The blasphemy law is currently at place is subject to misunderstandings and personal vendettas in a country that is akin to a culture of mob justice and street vigilantism.

November 20th, a factory owned by members from the Ahmadi community in Jehlum was set ablaze owing accusations of blasphemy by a local cleric. A day after, Ahmadi place of worship was also attacked. While there is currently no talk of debate or dialogue to curb increased saudization of Pakistan, what is most alarming is the desensitization of masses to propagation of the said hatred.

As Ahmadis live like second-grade citizens, many choose not to disclose their religious beliefs; a lie that lives forever in the paper trail of national ID cards, passports, application forms et al. And should they choose to own up to their beliefs, they are denied of positions in the public offices, admissions to schools and as the incident inculcating the degrading notices put up at Lahore Hafeez center suggests, even shop at the local markets.

While the action by authorities was unlike their prior records of ineptitude, a murder of humanity and reason occurred as scores of people gathered to protest the arrests. Later, as those responsible were granted bail, that very fan-club hosted their grand homecoming.

Can we ever truly eradicate our inherent prejudices and hate?

Then they came for me—and there was no one left to speak for me.

Negligence begets hate. While our heart bled at the sight of a Muslim Syrian boy washed ashore, we must pay attention towards the countless minorities – nay, Pakistanis- that have to bear the brunt of prejudices, hate crimes and systematic jabs at their mere existence.

These are harsh realities that many have been struck aside under the heavy narrative of ‘no one being safe in a country that is constantly at war within herself’. It is indeed legitimate to claim that no one is safe with banned outfits like LeJ tagging around like a noose, but to turn a blind eye to the prolific stake-burning based on religious profiling is naivety at best.

Unfortunately, this isn’t the end of the road for many of us who constitute the white part of the Pakistani flag we most endearingly hoist outside our governor houses and inside our public offices. As the very flag sits atop our judges benches in the supreme court, stark inaction prevails.

As an endnote, let us revisit the the words of novelist Nadeem Aslam, who penned down something that profoundly resonates with us— ‘Pakistan produces people of extraordinary bravery. But no nation should ever require its citizens to be that brave.’

The headlines were adapted from pastor Martin Niemöller best known quotation that emerged at the time of Nazi rule.

Sonu Nigam falling for this young Pakistani singer has everyone on both sides of the border feeling the love. People are apprecaiting the gesture.

Zara Noor Abbas just shared her mental health struggles. She has previously opened up about her journey through her TED talk.

A Level students in Pakistan are pissed at Cambridge, the governing university that administers their annual exams, for the disappointing results this...

We Just Saw The New Durex Ad And Honestly, WE HAVE SO 🤔 MANY 🤔 Questions 🤔

This Durex ad just pulled out ALL the stops and honestly, I just have so many questions about the plot line and the props and everything.

My quest for this ideal book ended when I finally heard about Pakistan's first English self-development book, 'Dare To Be You,' by Shahzad Malik.

Delite Pakistan is showing people it cool to care! With their latest ad, a father shows his son the ropes of what it means to care for another living ...