A lot of people are squeamish when it comes to talking about periods. Menstruation is a natural process for almost every woman. In our society, most people cringe when this topic is brought up. How exactly, though, can we hide from a phenowoman that occurs in almost every woman in the world? It’s high time we talked about menstruation.

Almost every girl bleeds. That’s just how it is. Why? Because their uterus needs to be prepared for implantation. Nothing weird about it.

2. It usually starts around the age of 12

Girls will get their periods around the age of 12. That’s a pretty young age, where they’re super impressionable. If you inculcate the thinking that periods are something to be ashamed of, chances are, that girl will carry that around in her head for the rest of her life.

3. It’s possible to not get your period

This is basically called “amenorrhea”, which is the absence of menstruation(missing more than three periods in a row, or the absence of menstruation before puberty). Although pregnancy is the most common cause, someone with reproductive organ or hormone related problems could also face amenorrhea. In most cases, it can be treated. God bless science.

4. Periods can be irregular

Even though they usually aren’t irregular, periods have a tendency to show up like an uninvited guest and stay for an extra few days, just for the heck of it.

The degree of pain varies from person to person, but usually, menstrual cramps should not be taken lightly. It can be excruciatingly painful, especially when associated with diseases such as “endometriosis”, where the uterine tissue grows outside the uterus, eventually trapping the shed lining as it has no way to exit naturally.

The pain has actually been likened to being as bad as a heart attack.

The next time a girl complains about cramps, instead of talking down to her, imagine what it would feel like if you got hammered in your lower abdomen repeatedly for a good 3-8 days.

Premenstrual syndrome is basically a series of physical and emotional symptoms that occur a week or two before a woman’s period. Two major symptoms are irritability and mood swings. Girls do not make this shit up, nor do they enjoy having to go through it.

You do not make it any easier by telling a girl to stop PMSing. If she could, she would have. 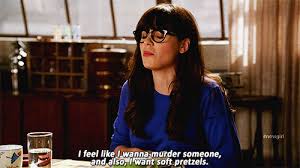 7. There’s nothing cringeworthy about it

You can’t be squeamish about menstruation and you definitely cannot stigmatize it.

If the girl bleeding through her vagina can deal with it, you can hear about it. It’s a lot less painful.

8. We need to spread awareness

We tend to forget, living in our own bubbles of safety, that there exists a world where girls don’t know about menstruation or how to properly handle the entire situation. Not only that, they may not have the means to get their hands on sanitary pads, since they’re overpriced to begin with, or due to a lack of knowledge altogether.

Keeping silent will not solve this.

9. Men need to learn about menstruation too

It’s not just the women who should know and spread their knowledge about it to other women – men need to know about menstruation too. It’s high time we had a mature outlook about this and stopped avoiding the topic like a disease, because it’s not one. It’s a major phenomenon that is integral and common to every society. Stop viewing it as an inconvenience or threat to your masculinity. Be more accepting.

And stop making it about yourself.

10. Its censoring needs to stop

If menstruation triggers your personal insecurities because it’s not convenient for you to know about how a woman’s body works, that’s your problem, not everyone else’s.

Stop telling girls to get over it or suffer in silence. Basically, stop being a prick.

11. It’s not something to be ashamed of

Ever feel weird when you’re in a room with elders or friends watching TV and an Always commercial pops up? Or if you’re a girl and you have to go shopping for pads or tampons and it gets awkward at the counter? Well, it shouldn’t.

And girls, we need to be proud of this phenomenon, even if it is a pain in the ass(or around the same area, anyway.) Your uterus is basically prepping itself for new life. You bleed 3-8 days a month and hide it well in public, you go through emotional turbulence throughout that month and make it through to the next day and you shed about three tablespoons of blood and uterine tissue every month while carrying on with the rest of your duties – all because society expects you to. You’re a walking miracle and you should be proud.

You’re a walking miracle and you should be proud.

Pakistan We Need to Talk About the R-Word. Rape.

Even after several decades, the iconic PPP political anthem 'Dilan Teer Bija'  is still loved not just by PPP's fans, but also by people across the bo...

The newest trend on Twitter? Sharing your first salary. In a country with no employer following the minimum wage standard, this gets pretty interestin...

The Story Of Daniyal, Mano And Julie Has Taken Over The Internet & Here’s How Pakistanis Are Reacting

Daniyal, Mano and Julie have become possibly the most notorius names on Pakistani social media over the last couple days. Here's the whole deal about ...

PTI MNA Muhammad Sanaullah Khan said 18 months is how long women are pregnant for before giving birth and science didn't know what hit it.

FAST University taking action over memes sounds like a petty thing to do but there seems to be a much larger conversation that has been overlooked.

With a massive fan following of around more than 31 million on Instagram, Bella Hadid is certainly not an unknown face and is loved by many.