90’s kids were the luckiest because they saw the Cartoon Network at its absolute best and cartoons show that offered actual SUBSTANCE rather than random animations running around your screen. While Tom & Jerry will always remain a classic, shows like The Power Puff Girls, Dexter and Courage the Cowardly Dog became somewhat iconic for this precise reason.

But, now that you’re all grown up, you realize how creepy Courage The Cowardly Dog actually was. Honestly, some of the stuff in the episodes was legit not safe for young children.

Imagine having a fucking ghost is standing outside your house, repeating “Return the slab” in the creepiest of voice imaginable and when you don’t respond, gives you baduaain too such as claiming your house will be attacked by insects that will eat you alive. How kind.  King Ramses’s Curse scared the bejesus out of me.

This episode truly reflected how dark this cartoon show really was.

Meet Freeeeeeaky Fred: Muriel’s baanjha who can scare the living daylights out of you, just with his toothy smile.

Fred always looked like there was something off with him which is quite obviously masked using that big ass smile and this was revealed a little later in the episode: he sought pleasure in shaving people bald, because he was naughty…

He talks only in rhymes and even tells Courage how the reason he broke up with his girlfriend was because he shaved her bald. 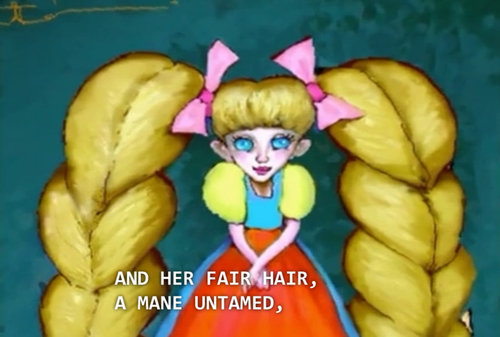 It can still give you chills.

3. The buddha baba who loved living in filth.

Old dude Conway joins Courage the Cowardly and he’s about 193 years old with bulbous eyes and skin greyish green, covered in filth. He believes surrounding oneself in filth and grime contributes to him long life and wants the whole world to adapt. Eustace obviously complies and there’s sludge from gutters and ugh, it’s gross but the buddha baba legit gave me nightmares for days. 4. When Muriel had insomnia that kept her awake FOREVER

Sandman, the king of sleep, who brings deep sleep to the world but is stuck with lifelong insomnia himself is pissed when he hears the world snoring and enjoying sweet slumber. He decides to steal Muriel’s sleep, leaves her awake, with not even a wink of sleep, which  basically turns her completely dysfunctional.

5. The seductive Queen of the black puddle.

A strange yet beautiful queen with huge razor-sharp teeth lives inside the puddle alone. She wants to seduce Eustace and take him to her underwater kingdom so she could eat him. Eustace eventually falls under her spell (doesn’t he always?) as the queen starts appearing in his tea, his bathtub and whispering his name again and again.

Not only this episode was creepy, but also a little R-rated for children.

So fucking disgusting, this episode deserves extra points for creativity. The purple foot with green pus filled warts was the kind of mental imagery I just can’t shake off. Of course, Eustace got the “big toe” that took over his body and became gangsta thug. Courage was left in a scary situation as the big toe started threatening Muriel’s life, ending most sentences with “or the fat lady gets it”.

Many a crimes are committed in the process, including crashing a train. Haye Allah, not safe for children AT ALL.

7. The return of the space chicken, who is now headless.

There were a bunch of space chicken episodes but this one takes the cake. The now fried chicken descends over Earth to claim heads from anything and everything using a plunger. Even plush toys aren’t spared. He captures Muriel and eventually reveals that he plans to steal Courage’s head and use it on his own body. OH MY GOD WHY WERE KIDS ALLOWED TO WATCH THIS?

There is a special delivery of a possessed mattress that takes over Muriel when she sleeps. What happens next is a series of fucked up imagery and an eventual exorcism.

9.  When Courage became a puppeteer.

Controlling dead bodies of Eustace and Muriel. Yep. This stuff was okay-ed for children television.

Share your favorite moments from cartoons with us in the comments section below. ???

All images including cover image via: Stretch Films

Sunset Cinema will be open to the public from Saturday, November 27th and will run every Saturday and Sunday for the next four weeks

I Come From A Broken Home – How Do I Explain That To The Guy I Love?

A conversation about abusive relationships in a broken home must take place. You can also send in your queries to hameshabaaghi@gmail.com

TECNO to redefine Photography with the all-new 60X Hyper Zoom

Apart from TAIVOS Camera technology, TECNO is bringing some exceptional features with the new Camon 18 series.

Technology holds the power to amplify human capabilities. Leveraging digital transformation, it is the evolution of businesses that will pave