Congratulations Lahore, You Rank The Highest For Air Pollution. We Beat India, Again

Like most mornings, I drove to work wearing a mask that hopefully blocks out air pollutants (PM2.5 to be more specific). Wearing these masks looked and felt farcical in the beginning but now it’s started to feel more and more like a part of my everyday attire. The funny thing is that people don’t even look at me incredulously because, at some level, they understand why I’m wearing this mask.

Lahore is ranked as the worst city for air quality, at the moment.

With how bad the air is right now, we should all be wearing masks, whether we’re in our homes or outside. This is a screenshot of what the Air Quality Index (AQI) was in Lahore at 9:34 am on January 3, 2019. 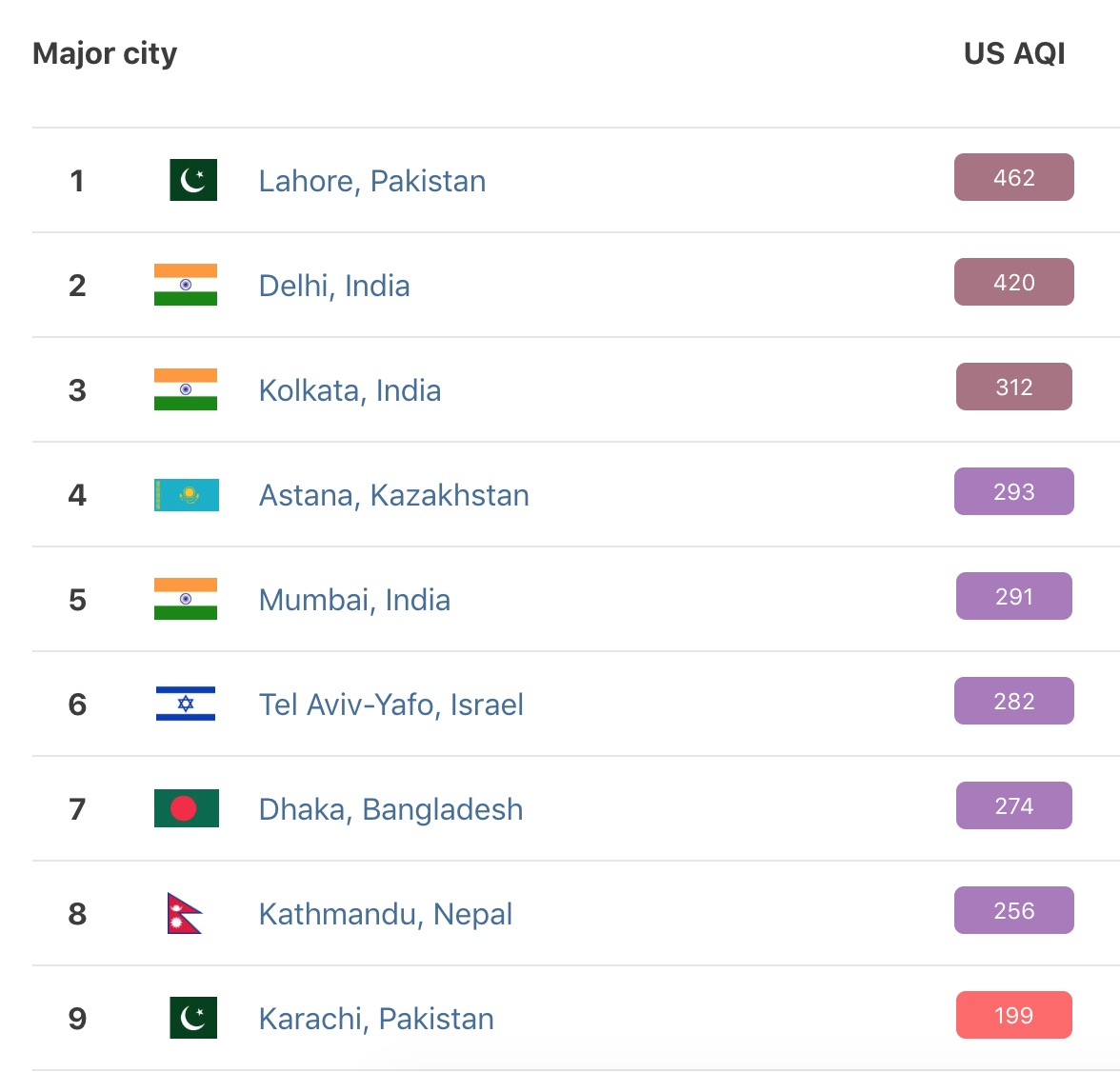 For those not familiar, AQI is “a system for reporting the severity of air quality levels in relatable terms to the public. The index ranges from 0 to 500, where high index values indicate higher levels of air pollution and higher potential for adverse health effects. Any value larger than 300, for example, is considered to be hazardous, while an AQI value of 0-50, on the other hand, represents good air quality.”

The numbers shown above are just from today but the hazardous levels of Lahore’s air persist and people are left desperate, praying for rain to offer some respite. But rain, if it does, will only give temporary relief and eventually be rendered as useless as the government’s ability to deal with this emergency situation.

You don’t, and the locals haven’t adapted either except through their ignorance of what is very much the biggest issue facing Pakistan. Those aware of it can buy masks and purchase air purifiers but Lahore is actually in an emergency situation. The joke is, we don’t realize it. pic.twitter.com/R27XE9plHj

There is no way of understating this: Lahore is in an emergency situation right now.

And yet, the government continues to remain utterly useless acting as if this isn’t worthy of their attention. Instead, the Chief Minister of Punjab is utterly clueless about climate change (and busy trying to educate people that Shahbaz Sharif isn’t the Chief Minister anymore). The Prime Minster’s advisor for climate change is busy tweeting pictures of himself with Arnold Schwarzenegger and making PR statements, leaving no one to take any concrete steps to deal with this emergency, let alone even declare one.

What’s more fucked up is that the Environment Protection Department (EPD) is blatantly lying to people about how bad the air quality is. I mean, how fucking dumb do you think we are, bhenchod.

Let’s put aside the fact that the website’s copyright still dates back to 2012 (lol, what a bunch of fucking morons) or the fact that EPD can’t even provide real-time data which means we are looking at information that’s already a day old. What really makes me grind my teeth is that they claim the Lahore is “moderately polluted.” MODERATELY POLLUTED??????

Oh and hey, to deal with this all, the EPD advises you to wear glasses and a mask. Lol, ok.

What’s even more ludicrous, is that according to the Punjab Clean Air Act of 2018, one of the main challenges highlighted was a “lack of sufficient and good air quality data”, yet the EPD itself continues to propagate poor data and false information.

#LahoreSmog thread about falsified US AQI readings issued by @EPD_Punjab

The citywide AQI is calculated using a mean of multiple monitors (unfortunately, Lahore only has two)

The reliable information that we’re getting related to air quality comes from Pakistan Air Quality, which was started by Abid Omar,  and other concerned citizens who have set up monitors due to the government’s inability to do so. Had it not been for these individuals stepping up, who knows how much worse the situation would have been?

In our meeting with the technical team of @EPD_Punjab, we proposed that the equipment manufacturer send a technician to check, service, #calibrate and #validate the 11-year old PM2.5 sensors. This is specialized scientific equipment and requires support. @PakAirQuality can help.

Meanwhile, people who should be providing solutions seem more focused on trying to challenge the truth and reminding us how many fucks they really give about people’s health.

Just a clarification: low cost monitors have the same coverage as government monitors. The article you refer is about placement of sensors for *indoor* monitoring. A network of low cost sensors powered by Artificial Intelligence is as credible as a single reference monitor.

At the end of it all, we can keep bitching and causing a pandemonium online but without the government taking action in an effective manner, there’s absolutely no way of improving the air because it’s beyond control at this point. The only question is, will the government take drastic steps immediately?

My fear is they won’t because they’re distracted by “bigger issues” such as raising funds for building a dam, sending troops to Yemen to fight someone else’s war, waging wars with journalists who hold them accountable for the truth, popularizing U-turns, championing the chicken formula and what not. Is this Naya Pakistan?

According to Punjab EPD and environment minister:
1. This is all nonsense. Lahore air is just fine.
2. Citizen AQI readings are wrong (while EPD refusing to do them.)
Acc to Insafians
1. It's all N-League's fault
2. No worries. Its not smog, its just fog.
Thank you.#LahoreSmog https://t.co/GHHljIh04r

I hope I’m wrong because I would very much like to take my niece and nephew to the park without worrying about them becoming asthmatic.

But, these words of a wise woman keep playing in my head.

Congratulations Lahore, you’re finally the best at something. Too bad it’s going to fuck you real bad.

Clear Your Calendars, These 11 Dramas Need To Be On Your Must-Watch List For 2019