We frequently find that girls are all too ready to proclaim themselves feminists, but their actions tell a very different story. You are sometimes your own worst enemies so be careful.

Here are thirteen things every girl has to stop doing ASAP:

1. Stop putting girls against each other based on looks

Don’t treat women like public property, to be commented on and discussed. They’re not models, and neither are you.

2. Stop trying to Maya Khan every girl you see

Is she living alone in another city for work? Has she popped out baby number 3 on her 3rd wedding anniversary? Is she dating her sixth guy this month? Not. Your. Business.

The patriarchal society we live in polices women enough without women joining in. Every time you denounce some act of some girl, you’re making you’re own sphere of action that much narrower for yourself too. Don’t be a part of it.

3. Stop trying to shaadi.com every girl you see

With the amount of aunty bashing that goes on in these parts, we doubt any of them read our posts. So if you are, instead, a victim, shut it down. Unless you’ve specifically asked for eligible bachelors, nobody should be running you through their mental database or be issuing dire warnings of your ticking biological clock and of what happens to ‘ziada parhi likhi larkian‘. 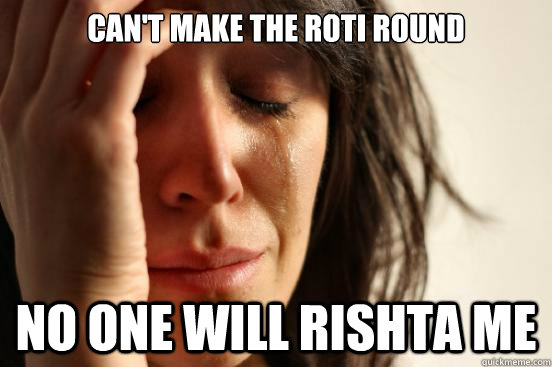 On the eve of her 28th birthday the unmarried girl undergoes a horrific transformation.

4. Stop trying to Naukri.com every girl you see

Same goes for work. Feminism doesn’t mean all women have to work and have wildly successful careers. It just means that they should have the freedom to do whatever it is that they want to do. If that is cooking classes, committee parties and parlor appointments, you should be broad minded enough to accept it.

Don’t dish out random beauty totkay to girls who didn’t ask for them. We know you have the ultimate solution to weight loss and a glowing complexion, but unwarranted sharing comes across as an insult. Unless it’s a problem they’ve asked your help for, keep your ‘beauty secrets’ to yourself.

Hard as it may be for some of you, try and avoid moral proclamations on other girls behavior or dress. Religion and morality are both personal so just focus on being a better person yourself.

7. Don’t blame girls for the harassment they have faced

Ranging from catcalls to outright groping, none of it is the fault of where a girl is, how she’s dressed or how she is behaving. Nobody asks for it. Ever. That’s why its called harassment, dumbass. You should instead wholeheartedly condemn it, and try and create an environment of support and trust instead of asking tum nay duppata liya va tha?

Whatever your own circle of influence, be it your family , friends or workplace, call out anybody who you think is doing any of the above. Being a part of any such conversation makes you a party to it. So speak up.

This could be as simple as reaching out to the girl involved and offering her support. You could try and convince her to get the individual reported or confront the perpetrator himself. Sexual harassment thrives on the silence of its victims, so you should always step in and call it out.

It all starts from the home. For those with sons, nephews, brothers, know that these beliefs take root at home. Make sure you always reinforce ideas of equality and respect and break the sense of entitlement that boys in Pakistan start to learn from the day they’re born.

Daughters, nieces, sisters also need to be taught all this at home. They’re looking and learning from your responses and how you live your life all the time. Comments like larkian ooncha nahin bolteen, bahir nahin jaateen, jawab nahin daiteen are all going to make them more and more susceptible to become victims of patriarchy. Empower them to know that they just have as much a right to everything their brothers do.

For some women escaping an abusive husband or calling out harassment can be unthinkable. The poorer classes often find themselves doubly vulnerable with an economic dependence on their abusers. Not to say that women from well off families don’t find themselves in a similar predicament. You should try and step in and help the women find a way out of it.

It’s important to not be preachy and imagine that the decision to speak out is as much of a no-brainer for a victim of harassment as it may be for you.

The social pressure can be immense, but you should stay strong and authentic. Don’t let it turn you into a kitty party aunty and don’t let it make you feel like you’re wasting your education if you don’t work. Do what you want to do. If you want to dress up every day, great. If you can’t stand makeup, great. Just don’t let anybody else think that they can dictate your life choices because you’re a girl.

Auditions for Pepsi Battle of the Bands are open and if you have a band then this is a call for you to audition. Right Now.

Doctors thought this woman had passed away when brought to a hospital in Karachi, but that was far from the truth.

As part of Pakistan’s celeb power couples, Yasir Hussain and Iqra Aziz are no strangers to the media. Their overall relationship, from them getting...

This Muslim Scholar Shared How Angels And Astrology Are Connected

This Muslim scholar's thread on angels and astrology, and their connectedness, is truly out of this world!

The woman screaming at the traffic warden is back and she's still screaming.

Mere Paas Tum Ho has a distinct way of showcasing love, cheating, heartbreak and even having a taste of one's own medicine.

28 Times Fawad Khan Made You Go Weak In The Knees