Media tells us that Pakistan is a poor country and that there aren’t much opportunities available for people here. However, some of the richest people in Pakistan have amassed eye opening fortunes.

Here’s a look at some of those rumored to be with the biggest vaults in Pakistan:

With total wealth estimated to be around 2.5 billion, and that is US Dollars, he is a businessmen with stakes in a host of companies. Mansha owns the MCB Bank and has made a number of investments in various sectors.

Former President of Pakistan, called infamously as Mr. 10% by his haters, Zardari is estimated to be worth $1.8 billion. He is said to have stakes in a number of business ventures that includes sugar mills all over Pakistan.

The chotay mian and baray mian of Pakistan, their worth is estimated to be around $1.4 billion. Before becoming the PM, he and his close family members were the majority share holders of Ittefaq Group.

Chairman of the Hashoo Group is estimated to be worth $1.1 billion and is known for his dominance in the hotel industry of Pakistan. Today they also export rice, wheat, cotton, barley and has invested billions in minerals, mines, insurance and batteries among other things.

Again, a businessman estimated to be worth $1billion, he is known to be among the first people to have a Rolls Royce in Pakistan. Schon group currently operates a pilot training center known as Schon Air.

Source: Made for Pakistan

President of the ARY group, Mr Yaqoob is a businessman estimated to be worth $1 billion who controls 7 media channels. He also has a stake in the gold market having around 20 outlets in Asia.

These businessmen are estimated to be worth $900 million, having incorporated Habib Bank in 1941. They own Habib Bank A.G Zurich, Bank Al Habib and Indus Motors that assembles Corolla cars. They also have stakes among sectors such as jute, paper sacks, minerals, steel, tile, synthetics, construction, glass, sugar, oil, computers, music, paper, leasing, packages and capital management. Is anything left? We don’t think so.

With an estimate worth of $850 million, these businessmen transformed into Kohinoor Rubber Works from a small shoe shop. They even bought the United Bank in 1959 and then witnessed five of their units getting nationalized. People look towards Tariq as one of the finest businessmen around. Dewan Mushtaq Group is one of Pakistan’s largest conglomerates in sectors like manufacturing, automobiles and polyester acrylic fiber. Their worth is estimated to be around $800 million. They even have the franchise license for BMW in Pakistan and now a Rolls Royce showroom, too. 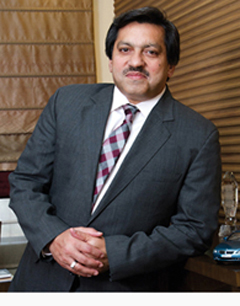 The three brothers’ worth is estimated to be around $800 million. They run McDonald’s in Pakistan, Lakson Group and the Express Media Group! They have also ventured into a number of industries that include paper, tobacco, chemicals, packaging, insurance, detergents and other household items.

Donald Trump of Pakistan, if you will? This businessman has an estimated worth of around $800 million, Malik Riaz heads the massive project which develops state of the art schemes in Lahore, Karachi, Rawalpindi and Islamabad. The man behind Bahria Town, he is also rumored to be the first man to drive a Bentley on Pakistan soil.

With estimated wealth of around $780 million, he has constructed residential schemes under the brand name of Green Fort. He is a leading investor in stocks, metals and currency and also has a philanthropic venture by the name of Hamza Foundation. Also, he is commonly known as Seth Abid.

$700 million is the estimated worth of this man who supervises the Chenab Group ( the company behind Chen One), along with his brother. Principally engaged in the manufacture and distribution of clothing, furniture, goods. quilt cover and curtains etc, the group also plans to establish new retails chains internationally.

With an estimated worth of $660 million, the Sitara Group owns a number of establishments including Sitara Chemicals, Sitara Textiles, Sitara Energy and Yasir Spinning with claims of state-of-the-art technology in their plants.

Famous for their construction and land development related errands, the worth of this family is around $600 million. So effective is their standing that even a rumor of him landing in a city for land acquisition purposes surges the prices of real estate overnight. Now that’s some power!

A businessman estimated to be worth $500 million, Razzaq heads Pakistan’s biggest construction and engineering conglomerates known as Dawood Group/Descon Group. This group also has an investment of $300 million in Bangladesh.

Owning and operating the Avari Group of Companies of which he is the Chairman, he is estimated to be worth $500 million. Also, the Avari Group is the first Pakistani company to have obtained international hotel management contracts. Mr. Avari is also a two time gold medalist at the Asian Games, along with his wife, for sailing.

The CEO of Cupola Group of Companies worth is estimated to be around $480 million. He started his career in fast food restaurant KFC, in Houston, TX. He has managed several other brands since. His company recently sold the rights to KFC in Pakistan to Delicious Holdings, a UAE based company.

The founder of Ibrahim Group has an estimated net worth of $460 millions. What started off as a small clothing agency has now not only grown to the a big textile empire, but has also diversified into Polyester Fiber and Energy. They are also the parent company of Allied Bank Ltd.

He is the Chairman of AKD Group and built it as a leading and vibrant set of business enterprises operating in key sectors of Pakistan including stocks and shares, media, textiles, real estate and oil and has exploration. Net worth is rumored to be upwards of $450 million.

Packages Limited has a credit rating of AA and its worth is estimated to be $440 million. The group has acquired a number of Coca Cola plants in Pakistan and its other famous brands include Nestle Milk Pak, Treet, Mitchells and Tri Pack Films and is the only packaging company offering a range of packaging solutions.

Saif Family’s estimated worth is believed to be around $440 million and most of their fortune is amassed through ventures in textile, healthcare, real estate and telecommunications industries.

No matter where you are if you believe in yourself you can shine just like they have. But remember, never do it through shady means.